I recently drove from Jersey to Virginia Beach and entertained myself along the way by watching out for roadside marketing humor.

Whether a funny billboard, a strange sign on the side of the road, or just a ridiculous marketing concept, I found much to keep me laughing through the four-state drive.

It doesn’t take much to amuse me, so when I saw a mom-and-pop diner in Delaware proudly proclaiming, “Famous New York Fried Chicken,” I just cracked up.

New York is, indeed, famous for its food. From the cutting-edge eateries of New York City to the actual food itself… NY strip steak. Coney Island hot dogs. Brooklyn pizza. New York style cheesecake. Even aged New York cheddar cheese… but New York fried chicken? I don’t think so. Maryland, yes. New York? Not so much. Either the owners have never been to New York, or maybe they thought it held greater appeal than the state to their south…?

Then, at a small strip mall featuring pond supplies, a pizzeria and miscellaneous other shops, I saw a sign so funny, I attempted to photograph it with my smart phone, while stopped at a red light. Sorry the photo didn’t come out better… but as you can see, it’s the type where the message can be readily changed up by swapping out the letters, and which you often see used at motels to welcome a particular group or new married couple. The message on this sign read, ‘My boss said change the sign. So I did!”

My boss said change the sign. So I did!

At first it seemed just incredibly funny. But on reflection, I think it’s also incredibly brilliant for being memorable and a great word-of-mouth marketing campaign – as surely people will be talking about it to family and friends. And in fact, a quick Google search proves my point – the saying is not original, and apparently has been posted and reposted all across the country.

The roadside advertisement that next grabbed my attention was for The Eastern Shore Railway Museum located in Parksley, Virginia, though, in this case, bad marketing was the operative reason why…

Although they don’t have their own website, (nor apparently a marketing professional to help them attract visitors), according to info I was able to gather online, the destination actually offers a rail museum, 7 different styles of rail cars from the early 1900s, and a tool shed with 1890’s tools and rail artifacts.

I am sure I could think up a better headline if I gave it any real thought, but just off the top of my head, wouldn’t it have been better to put the best thing up front: “100-Year Old Rail Cars, Tools and Museum” or “1800’s Train Station, 7 Rail Cars & Museum!” or even “7 Historic Rail Cars, 1890’s Artifacts & Museum”?

A variety of entertaining billboards soon followed, my favorite being the one sporting the famous Geico gecko. It featured their adorable lizard staring straight at us, face on, arms crossed over his chest, and in tongue-in-cheek manner reminded us of their campaign that for years has told us: “15 minutes could save you 15% or more on car insurance.” This billboard simply said, “15%. Need I say more?” 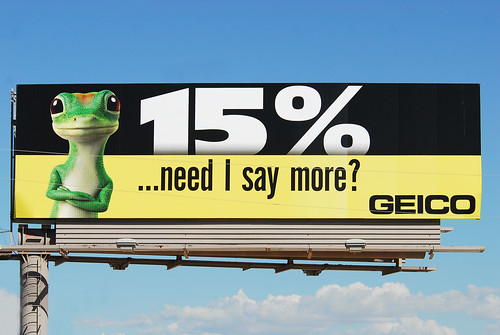 Of course, I’d be remiss if I didn’t mention a few of my other all-time favorite roadside billboards, even if they weren’t from this particular trip.

If you’ve ever travelled the I-95 corridor on your way to Myrtle Beach or Florida, no doubt you’ve seen the 100 or so billboards scattered up and down the highway, brought to you by the advertising folks of South of the Border, that iconic, if not kitschy tourist mecca in Dillon, South Carolina. You know the one, filled with, dare I say “tacky,” theme motels, restaurants, and junque shops purporting to offer wares from Mexico to Africa.

If you’ve never stopped, you really should, if nothing else than for the photo opp next to their giant gorilla, zebra or any number of other oversized animal statues. Or, if you’re like my husband, you may enjoy drooling over their array of fireworks offerings, which I personally hate and, thankfully, state law prohibits actually bringing home or firing off.

But regarding their billboards, their marketing humor includes an array of slogans, one funnier than the next. Among my favs is the one featuring a super-sized, 3-dimensional hotdog and a man attired in Mexican sombrero and poncho. The sign reads, “You never sausage a place! You’re always a weiner at Pedro’s.” Or my favorite, which simply advises, “Keep yelling kids − they’ll stop.”

Incidentally, I have subsequently discovered that there are many great blogs on this topic, and a really interesting Wikipedia entry in which I learned that the South of the Border complex is so large it actually has its own police and fire department! Almost as funny, to me anyway, is that the Wikipedia article goes on to say, “Related entry: tourist trap.”

Then, there are the highway billboards seen throughout Florida that read, “Your wife is hot”, and in smaller letters on line two, “Get your A/C fixed.”

But, the one billboard that takes the cake for greatest roadside humor ever, my opinion, was a giant billboard that I saw outside the Schiphol Airport in Holland. It dates back to about 10 years ago, but if memory serves, the sign itself was probably about 20 or so feet off the ground, and the billboard added another 10 or more feet in height. On it was displayed just two things: an enormous picture of a can of Heineken beer and the words, “Sorry, not actual size.”

Oh… and about the unusual image at the top of this article… it’s one of a two-sign set you’ll see up and down the streets of Virginia Beach’s resort area.

The second sign, usually found on the opposite side of the street, spells out their message in detail, which I’ve distilled down here: no obscene language or vulgar gestures, sexually explicit behavior, inappropriate attire, or behavior likely to disrupt the peaceful enjoyment of others. But I think the first sign says it all…

Your Chance to Win…Contest Entries Requested

I’m sure you’ve come across humorous roadside marketing − whether funny by design or just funny for its incredible stupidity. So let’s share. Send in your entries… and if you have photos, even better. I’ll publish them in an upcoming blog… and am offering three winners a $5 Dunkin Donuts card for the funniest submissions, (as voted by me) and some free publicity for your blog. Deadline for entry is midnight, October 26, 2012… so don’t delay.

3 comments on “Brilliant Billboards, Stupid Signs and Other Roadside Humor”